Yahtzee is a much loved dice game that has been played and enjoyed by millions of people since its appearance in 1956. The game of Yahtzee is made up of a number of rounds where players attempt to acquire various combinations when throwing the dice. You can get five of a kind, or straights, and each will score you points. The player with the most points becomes the winner at the close of the game. A roll with the same number appearing on each of the five dice is what everyone aims for, and this is called a Yahtzee.

The Yahtzee slot game by Williams Interactive aims to make you feel like you are at a Yahtzee party. The game has five reels and twenty five fixed pay lines, and the game is designed by WMS to stay true to the theme. The screen of the slot game is designed to look like the box containing the original board game. 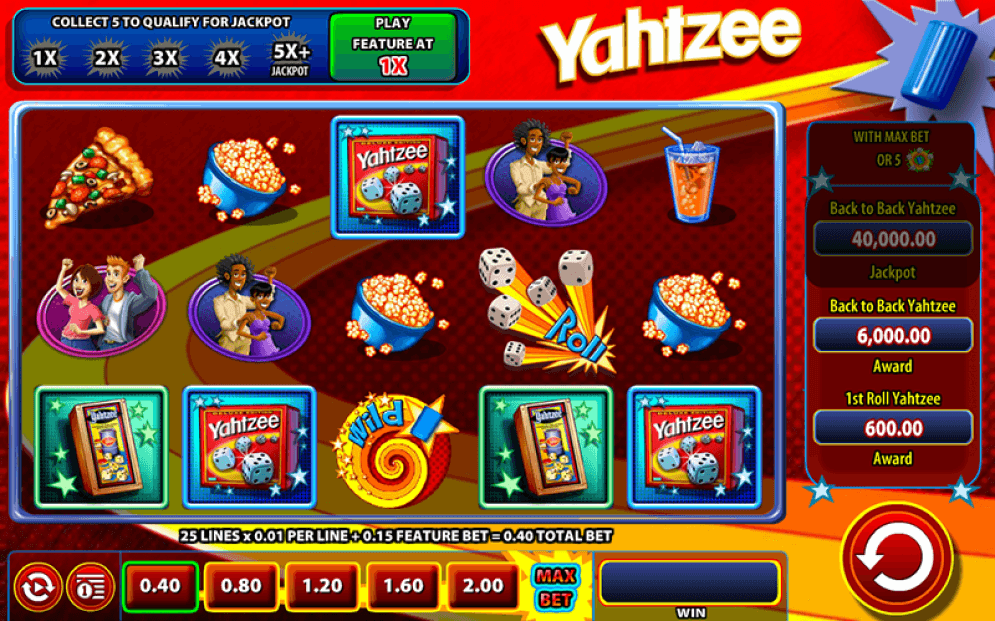 Symbols include three happy teams of players, with additional symbols like Pizza and Fizzy Drinks, and Popcorn. There are also symbols that show three Yahtzee games boxes dating from different times of the game’s history. There is plenty of colour and action, and you will hear the sounds of a party in the background, with players chatting and laughing. During the game you will have the chance of playing a real Yahtzee game, and winning a huge jackpot prize.

The Wild in Yahtzee slot game is a starry yellow swirl, and as such can replace any other symbols in the game to form a winning combination, except for the Bonus symbols.  There are two Bonus symbols, the blue roller of the dice, and the five dice spinning in the air.

The main feature of the Yahtzee slot game is the Wild Multiplier. If the Wild forms part of a win line you will be taken to a new screen. Here you roll two dice to give you a multiplier for your win. The total of the numbers appearing on the two dice are added together or multiplied, unless you throw two ones on the dice, and then you will be give a multiplier of eleven. At the top of the screen is a bonus meter with five symbols. Every time one of the bonus symbols appears on the final reel, one of the symbols is lit up, and each lit up symbols acts as a multiplier which really ups the entertainment of the Aussie pokies games online. This can be activated any time you have one or more lit up symbols, although the biggest prize is when all five are lit up.

Yahtzee slot game has another bonus round, called the Free Roll Bonus, which is activated when you land the bonus symbol represented by the five Dice spinning in the air, on each of the five reels. You will be taken to the same screen as before, but here you are guaranteed four of a kind, with one roll of the dice to come.

Yahtzee slot game offers players two different jackpots. The first Yahtzee jackpot is won if a player rolls Yahtzee on the first throw of the dice in the bonus game, after you land all five bonus symbols. The much larger Jackpot, called the Back to Back Yahtzee Jackpot, is awarded to the player who rolls a Yahtzee, and then does it once more on the very next roll.

Yahtzee slot can be played and enjoyed by players of all levels and budgets.