This most famous of the Gorgons has been a popular character for online slots, her snake-hair making an unforgettable appearance in a number of slots related to the theme of Greek mythology. NextGen Gaming has made use of her for their Medusa online slots offering as well, and contributed a number of original elements to the other games making use of her for their inspiration as a result.

Medusa online slots has five reels for players to work with, along with 25 paylines and a wide array of bonus features. While the dark clouds gather in the Olympus temples’ background the symbols all make the player well aware of whom he or she is dealing with: spears; grapes; amphorae; winged shoes; snakes; bronze coins and temple icons all make an appearance.

The array of bonus features means that there a number of additional symbols present as well: a scatter in the shape of the logo for the game; a soldier; the Pegasus and Medusa herself who represents the wild.

The Medusa wild comes in particularly handy for the so-called turned to stone respins feature, using her legendary skills to transform items into stone simply by gazing upon them. Should players manage to land these icons on the second; third and fourth reels they will be awarded with three free spins, alongside an expanded wild which freezes on one of these reels. All prizes accrued during this portion of play will triple in value.

Three of the Medusa logo scatters landing anywhere on this game’s reels will award the player with ten free spins, and any winnings the player accrues during this portion of the game will be multiplied by two. There are also soldier super-spins that come into play, and these are activated when a soldier icon lands on the third reel. Each soldier icon which lands on the reels after this has occurred will award the player with one free spin, and all winnings will be multiplied five times.

Landing one of the Pegasus symbols anywhere on Medusa’s reels will begin the mini-game linked to this icon, wherein players will be asked to select a symbol in order to reveal an instant cash prize. There are also win all icons available here, as well as those which allow players to select a second symbol. 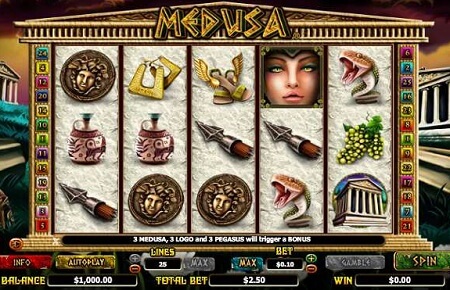 Players are able to add to the risk factor for this online slots machine game by choosing to enjoy the gamble feature it provides, and this is done by means of the button provided for it found along the bottom of the reels. A standard playing card is displayed face-down and players are invited to try to guess which colour it will be, in order to double their winnings, or which suit it will belong to, in order to quadruple these.

Players are able to take part in this game by means of small bets and a lesser amount of paylines if they wish to, since the bonus features are all able to be activated by means of the scatter symbols for it. However, wins are proportional to the stakes in play, and so bigger bets do have something to recommend them as well.