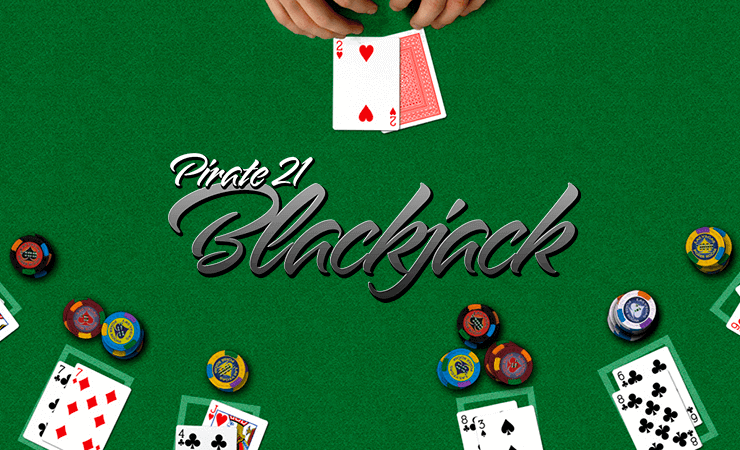 Pirate 21 Blackjack is another variation of the popular game of blackjack that is designed to entertain and add something fresh. This game is provided by multiple software developers, and generally plays out to the same odds range for blackjack play as classic blackjack, although each separate side bet game will have house odds of its own.

The distinguishing feature of Pirate 21 Blackjack compared to classic blackjack is that it uses Spanish card decks. Spanish decks contain 48 cards, which is a standard basic deck of 52 cards with the tens removed. The ten-card of each suit is removed from play.

This alteration to the deck obviously decreases the likelihood of natural blackjack, but this is just to compensate the house for some player-favourable rules in Pirate 21 Blackjack.

Some of the rules that assist players in regaining the odds is that doubling down is allowed on any point score and on any number of cards, which helps players substantially increase their winnings on good hands. Another helpful facility placed at players’ disposal is the ‘double down rescue’ rule, which allows for players to surrender even after they have already doubled their bet.

Pirate 21 Blackjack clearly also contains all the casino advantages of the terrific game of blackjack, and much of the play is very much this enduring casino classic. The objective is to score higher than the dealer, but without exceeding 21 points. Players betting range is generally between 1 and 100 coins per hand. Pirate 21 Blackjack is, indeed, also very well-known for allowing the play of 3 hands at once.

These 3 hands are played as individual hands with the dealer and are not linked. The basic blackjack standards that are provided in Pirate 21 Blackjack are that the dealer always hits on soft 17, player 21 always wins, and player blackjack beats dealer blackjack every time. There are further regulations that characterise this version of online blackjack Canada play in that players can double down at any time, split up to four hands, double after splitting, re-split Aces, and quite spectacularly, hit and double after splitting Aces.

Special Features of the Game

A special feature of Pirate 21 Blackjack are the additional pay-outs for certain hands dealt during the course of a game. There is no additional side bet required. Of notable mention amongst the range of pay-outs are the Five-card 21 paying at 3 to 2, the same as a mixed Six-Seven-Eight, and Seven-Seven-Seven. A Six-card 21 pays 2 to 1, and similarly, suited mini-straights have increased pay-out odds.

Over and above these bonus pay-outs, Pirate 21 Blackjack also offers players a side bet option, which pays when either of the player’s first two cards matches the dealers’ face-up card. In Pirate 21 Blackjack side bet, a non-suited match of card values pays 4 to 1, and a suited match rewards the player at 9 to 1 odds. In the rare event that both of the cards held by the player matches the dealers’ cards, it is only the highest win that will be rewarded.

Pirate 21 Blackjack is available for real money as well as free play in instant play format, and is therefore also available on all mobile devices through their browser like the standard games at https://canadacasinoguide.org/blackjack for Canadians.